An event, a sofa and two takes. That was Portugal Fashion. Entirely digital, the edition reinvented itself to be closer to everyone and to connect national fashion with the world.

It all began in March with Take I from Sofa Edition. The first day of presentations kicked off with Maria Carlos Baptista from the Bloom platform. Estelita Mendonça and Katty Xiomara followed with Aurora, a kind of rebirth after the months we all lived through. “From myths to stories, passing through esotericism and ancestral beliefs: the dawn, the prophecy of the two suns, the saints and angels, the stars, cartomancy and palmistry, the phases of the moon, the five elements.”

On the second day, Inês Torcato presented E faz-se luz, an artistic manifestation by all those who are in front of and behind the cameras, the curtains, the stages, the screens, the museums.

Maria Gambina followed in the sequence of presentations with Fagan, inspired by the social and economic upheaval experienced in the United Kingdom from the late 1970s. Miguel Vieira was charged with closing the second day with DNA. In this collection the designer tells the story of people who are confident in their appearance and see their clothes as an extension of themselves, as something that is part of their DNA. The collection highlights the importance of discarding the labels imposed by society “that limit us as individuals, and beginning to see gender fluidity as something natural and the result of free choice.”

The final day of this first take kicked off with Ernest W. Baker, with a collection in which dreams, the surreal and reality merge into one. David Catalán presented Reworkd, in a visit from the creator to the essence of the label, where he mixes workwear with more classic models. Alexandra Moura closed Take I with Subversion: revert, revolutionise, look again. These are the watchwords. The collection coexists with references from the mid-90s, readapting the items and adding the designer’s more plastic side.

The second part of the days dedicated to digital fashion began with the show by the fashion schools in the Bloom project. After Concreto, it was the turn of Sophia Kah to present Sophia Kah Encontra o Douro. The creator’s ideas were recorded in the stunning Douro valley and assume a “holiday chic” concept, in a combination of comfortable and versatile items of great elegance, in which the sleeves with frills or balloons, the eyelets and the short and layered tops stand out.

The day ended with Susana Bettencourt’s collection, “O lugar”. The creator, who usually explores fracturing themes of current affairs, presented a decontextualisation of the Casa Portuguesa, which is such a Portuguese symbol.

The digital presentations the following day began with “Welcome to Porto”, by Davii. Pé de Chumbo followed with “Craziness”, followed by Hugo Costa. Nimsdai is a reference to a Nepalese mountaineer who inspired the designer’s collection, with a touch of resilience in the deconstructed and oversized items.

The second day ended with Diogo Miranda, with a true ode to classicism. “Dreams are the result of the subconscious — a mystery, hidden from the external world.” According to the designer, the collection is “an examination of silhouettes with a focus on femininity and elegance, on their poetry but also on their extravagance.”

After the Bloom fashion shows and the presentation of the uniforms and sports equipment to be used by the Portuguese team at the Tokyo 2020 Olympic Games, created by Decenio, it was the turn of Paulo and Marta. And the scenario couldn’t be more surprising. The hitherto unopened Arouca bridge supported the steady footsteps of the creative duo currently living in London. A breathtaking setting that highlighted next season’s designs by Marta Marques and Paulo Almeida. In addition to the usual punk and grunge references, the items in this presentation are distinguished by being produced locally and include dyes made from waste, denim made from recycled cotton, biodegradable fibres and fabric created from recycled ocean plastic waste. None of the fibres in the collection were produced from petroleum, which speaks volumes about the brand’s ecological concerns.

Next it was the turn of footwear designer Luís Onofre to present Galore. This collection was inspired by the military grandeur of Napoleon Bonaparte, and the goal was to design a collection in which “the design is at the service of an essentiality that is not for the next winter season; the versatile boots stand out (short, slim fit or crimped), but so do the slippers, which can be glamorous when we add the nobility of metallic applications or the colourful fun of fur.” On the other hand, the texanas return with their contrasting embroidery and the designer’s innovation comes through with a new curved heel shape adorned with the brand’s monogram.

The finale was left to the duo Alves/Gonçalves, who rehearsed “an escape from melancholy, creating an aura of mystery that flees from the standards of the normal/usual, preferring silhouettes that loosen and expand, creating a cinematographic atmosphere.” Highlights include the voluminous coats fashioned in layers, the embroidery, and the play of light on each piece.

Also worthy of note are the Bloom competition entrants, such as Huarte, Maria Carlos Baptista, Ahcor and Unflower Brand, who have been attracting more and more attention both in Portugal and abroad, and promise to be the future of Portuguese fashion. 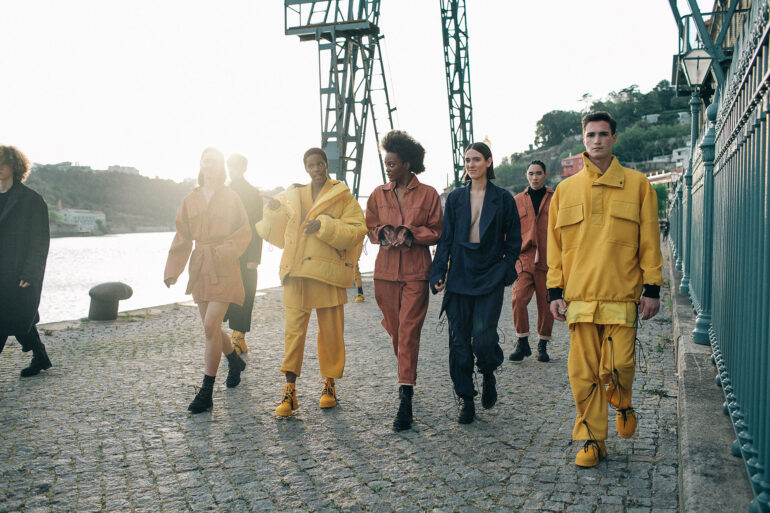